Extraordinary Events Brings Down the PSEi in First Quarter 2011; Gives Value to Risk Analysis and Margins of Safety

Uprisings in the Middle East from Egypt to Libya against long-time rulers and the natural calamities in New Zealand and Japan has brought down the PSEi in first quarter 2011.  There is something in the air.  The world is changing.  The uprisings started in Egypt and has brought down from power President Hosni Mubarak.  This spread to Saudi Arabia, Bahrain and now Libya where Muammar Gaddafi is doing his best to hold on to power amidst the Allied action against him.  This rocked and tumbled the PSEi as OFW remittances from the Middle East of USD2.7 bn comprise 16% of the total USD17.3 bn remittances of the Philippines.  Just when you thought it was over, the tsunami that struck Sendai in Japan sent shock-waves across worldwide markets as supply chains were disrupted and the threat of a nuclear meltdown looms.  Despite these extraordinary events, the PSEi crawled and scampered up in late March to reduce its decline to -3.8% for the quarter.  The late surge was spurred by the biggest telecom deal in the past decade, TEL’s DGTL acquisition.  Change is in the air from our planet’s tectonic plates to Middle East society to the Philippine telecom industry.  On a side-note, it may be a coincidence but the coach with the longest tenure in professional sports, Jerry Sloan of the NBA team Utah Jazz, stepped down in first quarter 2011 after coaching the team since the 1980s.  There is something in the air even in sports.

Does your stockbroker discount all these factors to leave you with resilient stock picks for your funds to take shelter in?  Are these enough given the magnitude of these events?  When the Middle East crisis broke, we dusted off a scrapped 5-month old research project of forecasting the PSEi.  With a renewed approach, we were able to derive PSEi Bands for investors to gauge whether the PSEi is already at high or low levels.  The PSEi bands have five levels reflecting worse to optimistic economic conditions and a central value of 4,084 for 2011.  In first quarter 2011, the PSEi has fallen to 3,705 near the low end of the band of 3,717 before rallying past our central value to close at 4,130 in the end of March.

Another research project we launched in first quarter 2011 was the Global Markets Risk Levels.  Here, 18 countries from developed and emerging markets including the Philippines are gauged according to risk.  This explains why despite its favorable PER, the PSEi has a net foreign selling instead of buying in first quarter 2011.  The PSEi is at the lower end of the table of countries (5th Weakest in Equities).  The Top Five favorable countries to invest in as of February 28, 2011 are Russia, UK, South Korea, Germany and Singapore.  France and Brazil are next.  These additional margins of safety are helpful especially amidst these extraordinary events.

There are still opportunities to make favorable returns in 2011.  Our stock picks have high margins of safety.  Just like in basketball, there is a time to play offense and a time to play defense.  Last September 2010, it was offense.  To play defense, you need resilient stocks and sound coaching to prevent the offense from scoring all over you. 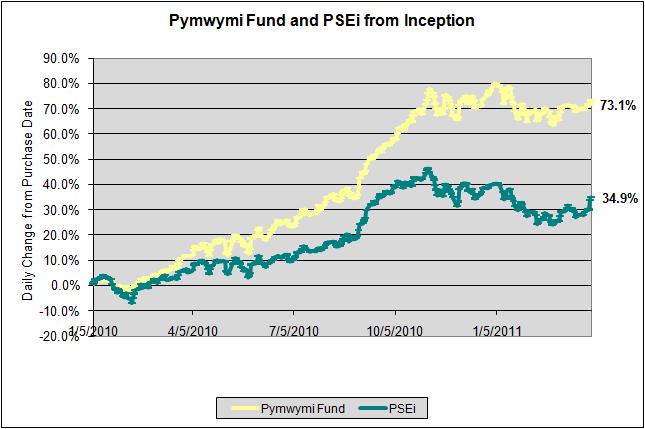 The Philippine Stock Market Research report is solely for information. It should not be constituted as an offer for solicitation for the purchase or sale of securities mentioned. The information herein has been obtained from sources believed to be reliable. Whilst every effort has been made to ensure accuracy, we do not guarantee the accuracy or completeness of the report. All opinions and estimates expressed herein constitute our judgment as of this date made on a reasonable basis and are subject to change without notice. No liability can be expected for any loss arising from the use of this report or its contents. As this is general information, it does not have regard to the specific investment objectives, financial situation and the particular needs of any specific person who may obtain this report.

Error: Twitter did not respond. Please wait a few minutes and refresh this page.